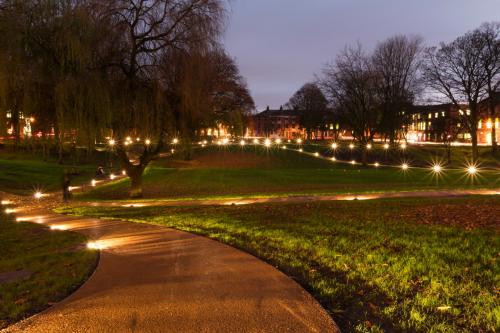 Following the blaze of publicity accompanying the launch of the so called Masterplan for NW Preston, Woodplumpton Parish Council are demanding that City Council Officers explain why the Masterplan has changed dramatically from the consultation version.

The City Council paid consultants URS to establish the needs of the area - earmarked for 5,300 new homes - but in a complete U turn, senior Councillors have removed the Health Centre and several community facilities from the Masterplan stating the preferred option is to upgrade and expand existing facilities at Ingol surgery and co-locate community/leisure facilities with the new schools or Preston Grasshoppers.

When launching the original plan, Council Leaders stated "This is about building long lasting and sustainable communities, not just houses" but since development started in early 2013 - with the exception of a children's nursery - details of shops and community facilities have not been submitted by developers - just houses, houses and more houses!

The E-W link road and Preston Distributor Road are way behind schedule; residents are faced with daily roadworks and traffic misery and planning conditions applied by the Council to safeguard the interests of existing residents are not being enforced.

NW Preston was described as a 'Garden City' where facilities would be easily accessible on foot but with a complete disregard for public opinion and consultation, Council Leaders have stealthily approved a Masterplan which promotes car travel to the south, with no explanation or consideration of the inadequate parking facilities at Ingol surgery or the impact it will have on existing roads such as Tabley Lane and Tag Lane.

The Parish Council arranged a meeting with City Council officers but the meeting was postponed - to allow officers more time to discuss the points raised with Highways.

​​The Parish Council is elected to represent the views of the community and help protect the quality of life in the ​local ​area ​but as our concerns are not being listened to and changes are being made without further consultation with residents, we urge all ​residents living in and around NW Preston to contact the Leader of the Council to add their concerns regarding the current development, lack of facilities, reliance on the surgery at Ingol and lack of consultation regarding the final version of the adopted Masterplan.